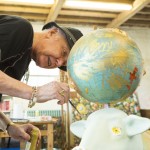 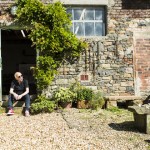 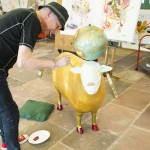 Conrad and The Golden Fleece

Conrad, who has homes near the Solway and in California, chose to draw attention to the importance of wool in the history of world trade. His golden sheep, with ruby slippers and a globe fixed on her head, stands on a red plinth – a reference to the red woolsack on which the Lord Chancellor originally sat to symbolise the huge value of wool to England in the Middle Ages. Conrad said that wool has been central to myths and world economies, from Jason and the Argonauts’ pursuit of the Golden Fleece to the woolsack.

“The slightly awkward juxtaposition of the globe and the sheep obliquely refers to the role wool played in both the world’s economy and the growth of empire,” he said.

Conrad, who was born in Cleator Moor, has exhibited all over the world and won numerous awards. He said he agreed to create the sheep as a favour to Cumbria Life, knowing that it was to go towards a good cause.