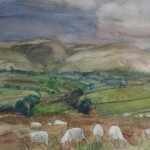 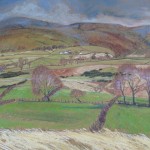 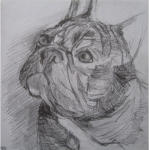 I am an artist living in the Fells. Daily, I am inspired by the glorious landscape, the flora and the fauna.   I would like to represent some of that heritage and beauty on the Herdwick sheep.

I have two visions which both fight for first place in my mind:-

I would like to make the Herdwick disappear (not literally) and become part of the fells landscape, with the dark greens of the gorse always in flower somewhere, rust-coloured brackens, heather, juniper and golden grasses including attractive cotton grass.

“A wolf in sheep’s clothing” would, in Cumbria, be a “Fox in Herdwick’s clothing”, representing the two most adapted species in the harsh terrain of the Fells – both being part of the rich history and culture of the unique Lakeland Fell Packs.