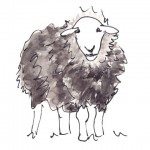 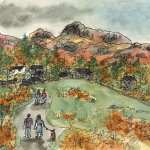 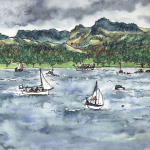 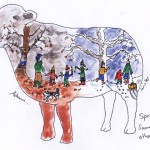 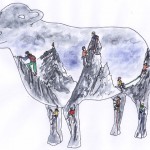 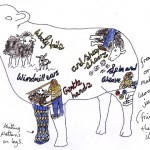 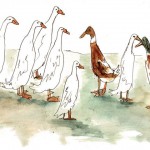 Sophie is a freelance artist and illustrator based in Bowness on Windermere. She grew up near Kendal and spent her childhood in the Lake District climbing mountains and developing her love of the outdoors. She spent 9 years living in Edinburgh where she completed a degree in illustration at Edinburgh College of Art and subsequently worked as a freelance illustrator whilst also helping to run a small art gallery in Marchmont.

In 2013, the Lake District drew her back and she now enjoys spending her days sketching and painting around the towns, fields, mountains and lakes of her home county. Drawing on location is essential to Sophie’s artwork, which is all about capturing immediate impressions of places, animals, people and situations. She likes to complete each drawing in one sitting if possible to really capture the immediacy of the fleeting moment. Her inspiration comes from the world around her, whether it be from new and inspiring places or from keenly observing the apparently ordinary and familiar in everyday situations. She works predominantly in pen and watercolour but also sometimes in acrylics. She loves drawing animals and is at her happiest following sheep or chickens around a field attempting to capture them with her pen before they scamper away.